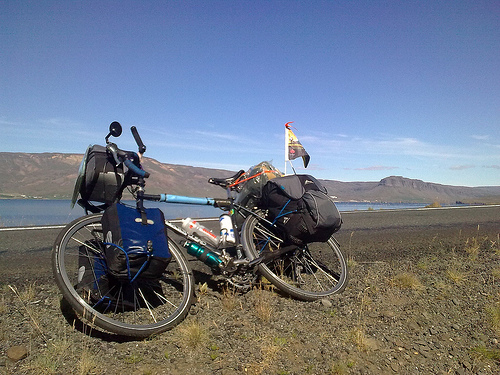 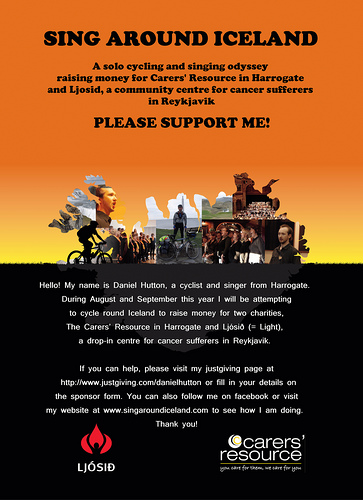 
Accomplished English chorister Daniel Hutton is cycling 1.000 miles around Iceland for charity, singing for families in exchange for room and board. After participating in an exchange program between the ‘Good in Parts’ and ‘Kvenkonur Kópavogs’ choirs in early 2011, Daniel vowed to return with a mission.

His ‘Sing Around Iceland’ initiative is born from three things dear to his heart: singing, exploring unfamiliar landscapes, and his mother. Daniel has been avidly involved with choir since age 8, and has taken on a number of important responsibilities including concert manager of the Harrogate Choral Society since 2007 and teaching professional singing lessons. He has already released two solo CD recordings.

Yet amidst his flowering career, an unfortunate turn of events caused him to focus his efforts elsewhere. His mother learned she had developed spinal cancer and Daniel fully supported her throughout the turbulent time. As she struggled to fight the illness, which resulted in a spinal ablation procedure, he turned to the Carers’ Resource charity, which specialises in aiding friends and family of those fighting illnesses. Their cause touched him personally, and inspired him to donate half of the money he raises through ‘Sing Around Iceland’ to their cause (his goal being about 950.000 ISK total).

The other half will be given to Ljósið, a Reykjavík-based charity that has the “goal of enhancing the quality of life by strengthening the spiritual, social and physical strength” of those effected by cancer, according to their website. Daniel’s ultimate goal is to “help raise their [charities] profile so that those who could benefit most can get to know about them and recognise the invaluable work they do.”

His expedition formally began on Monday, August 8th, when he left Kópavogur equipped with his cycling gear and headed towards the Snæfellsnes peninsula. He has since cycled around the Westfjords, covering 1200 km and singing for 25 people. His next stop is Akureyri and then he will travel to Egilsstaðir by mid-September and leave the south for last. “I will try to give an idea of how far I have gotten and when I think I am likely to arrive in a region,” he says, “so that if anyone is able to offer me a bed they can see when I might reach them and decide if they can help!”

If you are interested in helping Daniel either by offering him a place to stay for the night or to make a charitable donation, please contact him through his website, www.singaroundiceland.com.